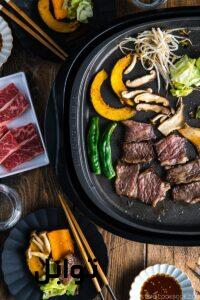 Here’s the ultimate guide on how to do a true Japanese Teppanyaki at home! With an electric griddle and fresh ingredients, you can easily enjoy the fun of indoor grilling at any time. A homemade Teppanyaki Sauce is a must.

As a nation obsessed with grilled food, the Japanese takes delight in grilling indoor by making Teppanyaki (鉄板焼き) at home. It’s our Sunday grill, a pastime we enjoy over the weekend and year-round.

On the hot griddle, there is thinly sliced meat, succulent seafood, freshly chopped cabbage, generous piles of crunchy bean sprouts, seasonal vegetables, and assortments of mushrooms sizzling away. Family comes together around the small grill, cooking, eating, drinking, and have a good time.

No backyard? Rainy outside? No problem! Let me show you how to make delicious Japanese Teppanyaki at home that will surely satisfy.

In Japanese, the word Teppanyaki stem from teppan (鉄板), which is the metal plate or flat iron griddle of which the food is cooked on, and yaki (焼き) translates as grilled or pan-fried. Similar to teriyaki, teppanyaki describes a style of cooking or food preparation.

The cooking device to prepare Teppanyaki is called a teppan, and it comes with a flat metal surface. Teppan works comparably to a grill. You can cook anything from steak, chicken, seafood, vegetables, okonomiyaki, or even yakisoba noodles on it. However, there’s a difference between grilling on a teppan and a regular grill. Because of the flat surface, a teppan catches all the juice on the cooking top so the food is nicely flavored and moist.

The origins of the Teppanyaki grill are debatable, but it is evident that this method of cooking has been around in Japan for a long time. Many families would gather together and cook their dinners over small grills.

In 1945, Misono, a restaurant in Kobe introduced the idea of cooking Western-influenced food on a teppan. The chain restaurant was believed to be the pioneer of the Teppanyaki-style steakhouse. As they featured beef steak, it became popular with the American army that was stationed during the post-WWII occupation. The foreign patrons also enjoyed watching the skilled chefs preparing the food right in front of them. As popularity continues amongst the tourists, the chain leveraged on the performance aspect of the chef’s preparation by making it the main draw.

Today, outside of Japan, Teppanyaki is often being associated with the pinnacle of Japanese grilled food served at casual dining restaurants. The dishes are cooked by a tableside chef that performs cooking acrobats of flipping shrimp tails, egg juggling, and onion ring volcanos. The place you go with your friends and co-workers where you can eat, entertained and have a great time.

However, the true Japanese teppanyaki is rather different from what you experience at American-style Teppanyaki. When we mention Teppanyaki in Japan, it means fancy steak dining where Wagyu beef is being served and a meal can easily cost you $100 and more.

My grandfather used to own Teppanyaki restaurants in Osaka where it offered courses featuring the finest Wagyu beef and exquisite seafood like abalone and lobster. The highly skilled chefs take great pride in preparing the food and presenting them as a work of art.

There are no flying shrimp or onion volcanoes. The theatrical performance is almost non-existed at teppanyaki restaurants in Japan. There’s no yum yum sauce or fried rice as a filler either. You still get to watch the chefs in action, but the real focus is all on the cooking techniques and the ingredients.

As Teppanyaki also refers to any dishes cooked on a teppan, you’ll find a broader range of menu being offered. In Osaka and western regions of Japan, casual restaurants serve up street foods such as Okonomiyaki or Yakisoba or Yasai Itame (stir-fried vegetables) that are cooked over large flattop griddles, offering a whole different kind of dining experience.

What is the difference between Teppanyaki and Hibachi Grill?
In the United States, the term ‘hibachi grill’ is often used interchangeably with Teppanyaki steakhouses which leads to confusion that they are the same.

The traditional teppanyaki grill has a flat, solid surface and is typically heated by propane. Some residents in Osaka and the western region of Japan own a special Teppanyaki equipped table so they can prepare their food easily. My grandparents used to own one too in their kitchen! It was usually covered with a wooden top, but when it was time for Okonomiyaki, you could remove the top and turned it into a gas-heated iron griddle.

These days, these tables are not common anymore. Instead, most modern Japanese families use a non-stick teppan, an electric griddle that we call “hot plate” (ホットプレート), like the one I use to make Teppanyaki at home. In the meantime, the restaurants generally use commercial-size Teppanyaki grills that are fitted for cooking for a crowd.

What exactly is Hibachi (火鉢) then? Hibachi is actually not a cooking grill as explained by many English websites. It is, in fact, an ancient indoor heater where you warm your hands and boils water for tea. It has been mistaken as Shichirin (七輪), which is a small, cylinder outdoor stovetop that is heated by charcoal. So yes, Hibachi is a complete misuse of the word. How did it get so wrong?

What You’ll Need to Make Teppanyaki at Home

Now that you’ve learned the background of Teppanyaki, it’s time to get cooking! My family cannot get enough of Teppanyaki because it is truly a joyful activity to enjoy a meal together. It’s convenient, simple, fun and you get the most flavorful food in no time!

1. The protein of your choice

Typically, we prepare a short rib which is sliced to 1/4 inch thickness. When the meat is well-marbled, it is less chewy and tender.

You can also serve pork, chicken, or seafood. If you’re a vegan/vegetarian, use tofu, mushrooms, and additional vegetables.

Some of the common vegetables we use for Teppanyaki grill include shiitake mushrooms, oyster mushrooms, shimeji mushrooms, chopped cabbage, bean sprouts, kabocha squash, carrots, and shishito peppers. Feel free to add various vegetables like zucchini, eggplants, sweet potatoes, and so on.

In Japan, some people call the dipping sauce Teppanyaki Sauce, but the sauce is used mostly for the grilled meat so most people call it Yakiniku Sauce, or Yakiniku no Tare (焼肉のたれ), which literally means “grilled meat sauce.”

You can get the ready-made sauce from Japanese grocery stores, but I highly recommend making your own. I have another variation of Yakiniku Sauce recipe if you’re interested in trying out.

It takes only a few simple Japanese condiments to put together. Not only it’s super easy to make but also is preservative-free and you know what’s in the sauce! I’m going to talk more about it below.

You’ll need a teppan or an electric griddle like this to enjoy the tabletop grilling. We have one from Zojirushi and love using it on our dining table.

How about the odor and smoke of an indoor grill?

Some of you who always grill outside may not used to the idea of “indoor” grilling. As the majority of Japanese do not have a backyard or a big balcony space to enjoy an outdoor grill, the concept of the indoor grilling is widely adopted. They are also accustomed to the atmosphere of Teppanyaki, Japanese BBQ (Yakiniku), and Yakitori restaurants.

You can’t prevent the odor and smoke from grilling inside the house but you can reduce it by making sure your dining room has good ventilation. Open the window a little bit (even in wintertime) and turn on the kitchen vent if it’s nearby. Be sure to close all the room doors so the smoke doesn’t get in.

It might still bother you, but it doesn’t last more than a day. You’d only remember having the fun Teppanyaki meal with your friends and family.

How to Make Delicious Teppanyaki Sauce
Now let’s talk about the homemade Sauce that will elevate your Teppanyaki experience at home. It has all the complex, sweet-savory flavors that go so well with grilled food. Tell your family and friends that you make it from scratch. They would not guess that it’s ridiculously easy to make!

For all the JOC recipes that require sake and mirin, I use Sho Chiku Bai Classic Junmai Sake and Takara Mirin. You can purchase them in Japanese grocery stores and some Asian grocery stores (with alcohol permits).

For non-alcohol options, you can substitute sake with water, and mirin with water and sugar, although it does not have the same result.

When you enjoy teppanyaki at home, pairing it with delicious sake is inevitable. We are big fans of Takara Sake and among our favorites is Sho Chiku Bai REI Junmai Daiginjo. A daiginjo sake means a high percentage of the rice is polished to create sake with superior texture and flavors.

After dipping the various ingredients in the homemade teppanyaki sauce and savoring every bite, take small sips of sake and let it intertwine with the food. It is simply amazing. The sake also clears the palette so you can fully experience the next bite and let your taste buds enjoy the journey again.

It’s in the spirit of simple pleasure that I present Teppanyaki to you. The idea of bringing a family together over delicious foods makes Teppanyaki a worthy meal of all time.

Japanese Ingredient Substitution: If you want to look for substitutes for Japanese condiments and ingredients, click here.